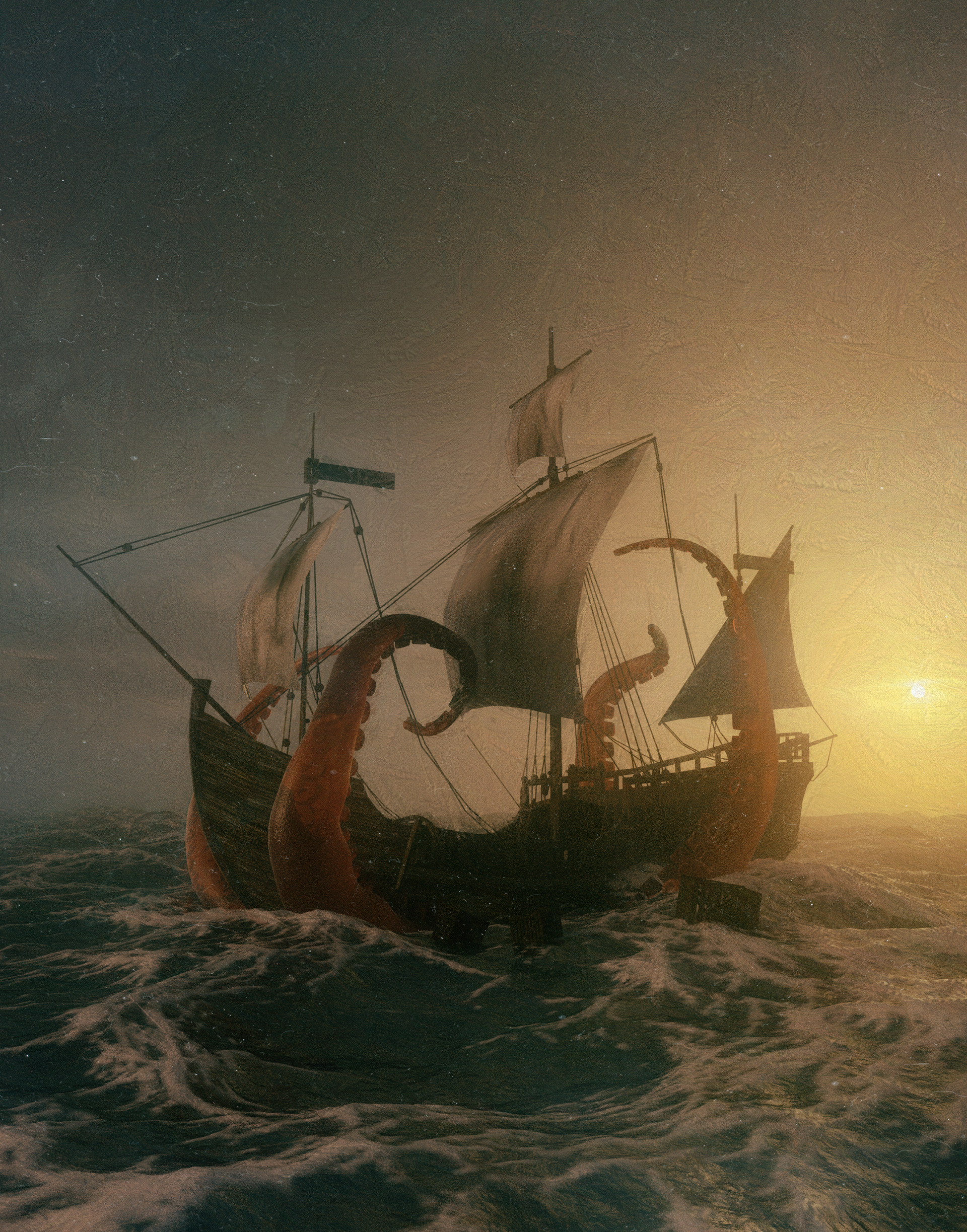 (I know I've done this before for this game, but I think now it's more organized and esay to read)

Well, I already knew pirates would be here but not sure in what form. When I found the cover it immediately remind me of Kraken scens in Pirtes of the Caribbean 2. LOTS of good quotes at 2 and 3. There's a scene where they talk about the world having less in it.

That felt like Davy Jones is really losing his grip on the sea. Like when they find  the kraken corpse and realize maybe magic is not enough or maybe he alone has not enough power.  So maybe the cover art was not the kraken attacking the pirates,  but the other way around!

This was a really fun research.  I already had a lot of background (Pirates of Caribbean, One Piece, Black Sails, ...) and I was reading 7th Sea at the time. So that got me covered for powers, items, places... But I lacked knowledge on sea creatures and notorious pirates.

I went to look for sea monsters in different cultures (japanese, nordic....). As for the notorious pirates, it was easier, many lists with life details available. After I decided on the list (10 of each) it was easier.

At Muramasa and Outlaw, players kinda could mix their classes/backgrounds with any power (rings, seals, charms). This time I wanted the class to be the power you start with. I didn't want to dela with hierarchy in a ship so I assumed everyone dealt with what they skilled at and that's it.  But since they didn't start their life as pirates with it to begin with, it would make send for the power to be acquired.

When I came up with the crew helping Davy Jones escapees, I thought that he would lend powers to the party, since escapees stole powers as well. For the crew, I mostly tweaked 7th sea magic in a minimalist way. I've added some minor magical items based on One Piece references some other places.

I've wanted the magic here to be a skill. You can't increase it but the greater the effect the greater the cool down to use it again. Since you're using the power of a weakened creature, made sense.

Creating the ship tables were swarmed with One piece references as well. The tables for name and flag were basically i realized that most cases fit the criteria. Sometimes it was just too fun roll to create flag and name.

When upscaling monsters and pirates, I just wanted to add a single strange feature to them, either to breath life into it or to summarize what problem it meant. Many here were based in historical texts or legends (i.e there was indeed  rumors that Black Beard drank rum mixed with black powder).

Stolen powers are basically One piece powers as well. At some point I realized 'Oh, this would be a power so fun to players to use' So at that time, another thing clicked. 'What if I allow players to swap their power for the one stolen?' Davy Jone wouldn't care since hes getting powers back nevertheless.

In the end I also added that the escapee itself would lose some ability to the ship, making it crazy powerful by the end.

Turns out many sessions happened without a captain. Everyone felt kinda important due to the gifts. So it turned out safe to not have any rule for that.

But if the pirates were ceasing to exist (piracy was """"over"""" by the early 1800s) why would these pirates help at all a sea they don't belong anymore. "the problem with being the last of anything: by and by, there be none left at all" -Barbossa

So what if Davy Jones promises entry to Fiddler's Green, the pirate heaven mentioned in the song of movies. That felt better, players agreed. The last journeybefore heaven.

This would mostly mean it needed water close by. Not necessarily a sea, even a river connected to it would suffice (*magic*, c'mon, it's lo-fi after all