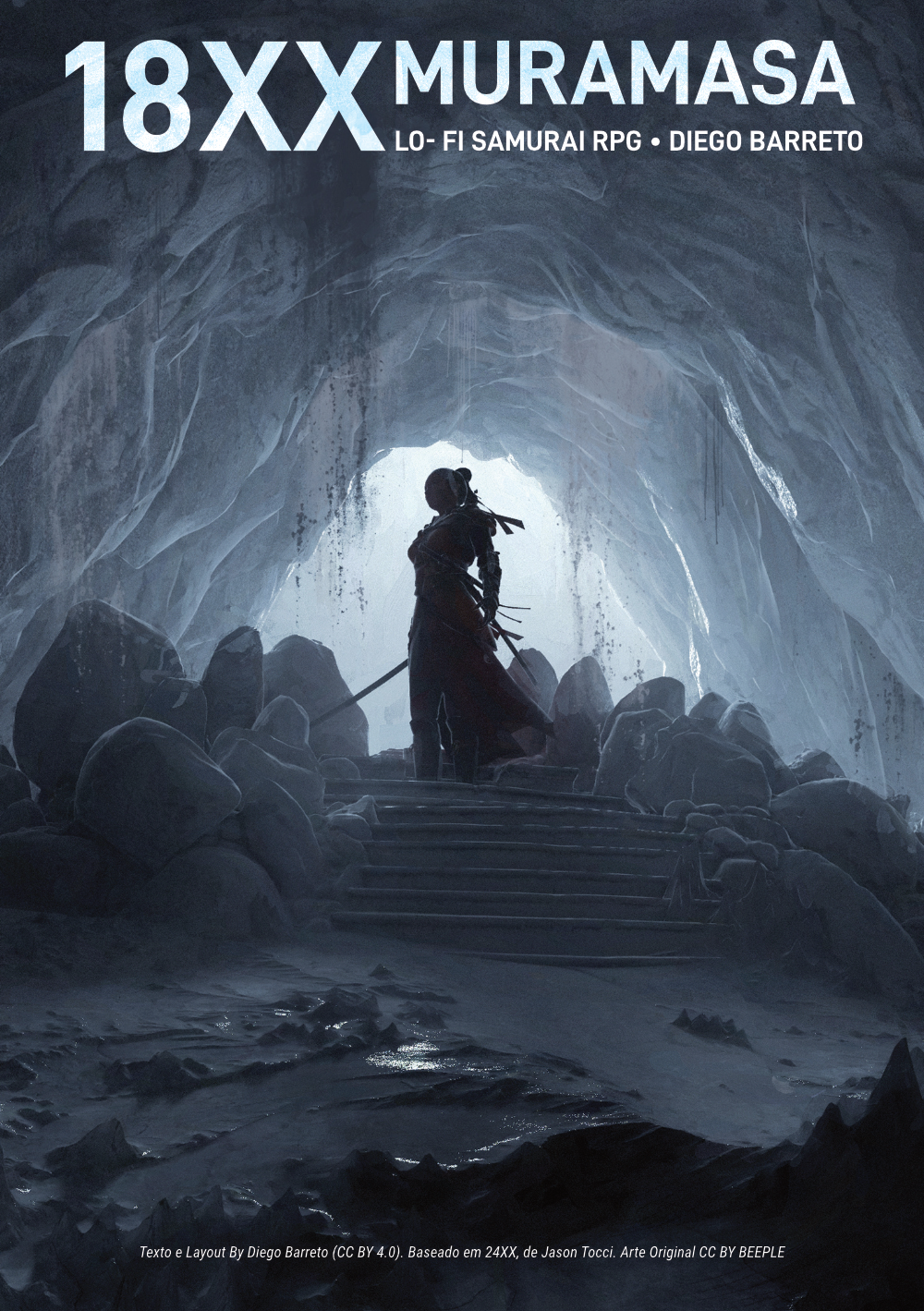 18XX Muramasa is a game about samurais tracking down cursed blades trying to find the one who hurt them.

All started at the cover you see above. What was the samurai looking for? Is he somber because of anger or guilt? Maybe revenge? Maybe it is chasing something that wounded him? What if not a creature, but a blade? Wasn't Muramasa the name of a blade? I think these where enough questions to begin the next step.

Nice findings here. Made me wonder if the blades were really cursed that players are all victims of those in some way.

-Muramasa is the name of a japanese blacksmith of the 1600s (also of a short school of blade forgers later on).
-Many Muramasa blades, mostly different types of katanas but also spears and maybe others.
-Later on, the blades where really banned by one of the firsts shoguns. Mainly because of relatives being wounded or killed by those blades.
-The blades became a symbol against the clan occupying the shogun position at the time and many forgeries were made.
-Much years later, it became pop culture that they were actually cursed an that spread to the media.
- Nowadays, there roughly 20 Muramasa blades kept in different collections.
-None are considered national treasury (many others are) and only one is considered work of art.

I'm a anime fan so there were many japanese stories to reference here (Naruto, Demon Slayer, Samurai 7, Rurouni Kenshin...)

As I was writing, it came to me some desires/decisions. Assuming I was gonna write more than one 18XX game, I wanted to be 'exclusive mechanics' for that game. So you could mix different games and each player could be from a different background and have access to different mechanics.

For the specialties, I pretty much adapted the ones from some of the 2400 classes at the time. But when came to add to that I've arrived at Ring Techniques and Magic Seals.

-Techniques would be traits that could have minor effects and could be broken for a higher effect (Clearly demon slayer inspired). Not sure if I saw someone do that or I was the first one but there I realized traits were a tool I would very much end up being really fond off (maybe some Fate influence here).

-Magic seals would be pieces of paper with a magic sealed inside it. I wanted to restrict the initial jus to encourage creativity.

At character details I felt it needed to have tables for ties to the blade. What was Lost was pretty much brainstorming but I wanted to be all over the place so they could trigger different revenges if the player wanted (revenger for losing money and losing ebst friend are very different)

At GM's page, I looked up for lists of places and kept adding details when I felt could be cooler. Twists are always a good thing to have. I believe I started wanting to have twists covering the mission, the blade and the group. Many movies, series and anime influence here.

Blades table were SUPER fun to make. I'm sucker for combining sparks and prompts and creating a new thing everytime. This one I think may be my favorite of all 18XX.

Not much was cut off from the original. At first techniques were too complicated and magic seals were being hoarded. I simplified techniques but didn't want to add much rules to regulate the seals so I just stated if you're too many seals, things are riskier, like walking with a bunch of nitroglycerine vials. Be careful not to trip.

The main change was that the original game was supposed to be set in the 1600s but after thinking about doing a 2nd 24XX game, i remembered a quote from reddit saying that 19th century was the only time you could have a party of a samurai, a gunslinger, a pirate and a steampunk scientist and be historically acturate. That made change to 1800s and start the next game.

19th century was already having lots of foreign influence in Japan. Since 18XX toys a little with time, you could easily add almost any other 18XX title